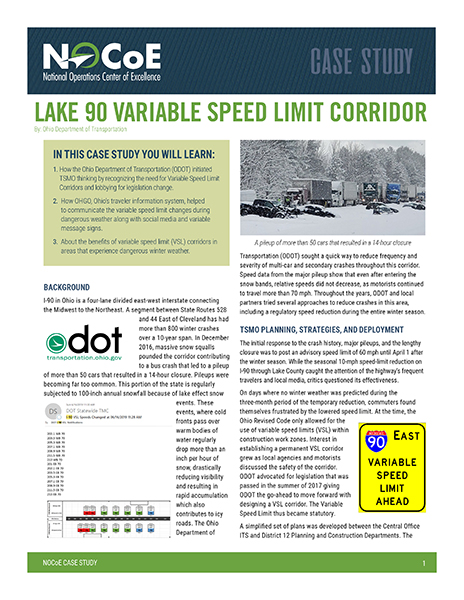 I-90 in Ohio is a four-lane divided East-West Interstate connecting the Midwest to the Northeast. A segment between State Routes 528 and 44 East of Cleveland has had more than 800 winter crashes over a ten- year span. In December of 2016, massive snow squalls pounded the corridor contributing to a bus crash that led to a 50+ car pileup that resulted in a 14-hour closure. Pileups were becoming far too common. This portion of the state is regularly subjected to 100-inch annual snowfall because of lake effect snow events These events, where cold fronts pass over warm bodies of water regularly drop more than an inch per hour of snow, drastically reducing visibility and resulting in rapid accumulation which also contributes to icy roads. The Ohio Department of Transportation (ODOT) sought a quick way to reduce frequency and severity of multi- car and secondary crashes throughout this corridor. Speed data from the major pileup show that even after entering the snow bands, relative speeds did not decrease, as motorists continued to travel more than 70 mph. Throughout the years, ODOT and local partners tried several approaches to reduce crashes in this area, including a regulatory speed reduction during the entire winter season.

The initial response to the crash history, major pileups, and lengthy closure was to post an advisory speed limit of 60 mph until April 1 after the winter season. While the seasonal 10-mph speed-limit reduction on I-90 through Lake County caught the attention of the highway’s frequent travelers and local media, critics questioned its effectiveness. On days where no winter weather was predicted during the three-month period of the temporary reduction, commuters found themselves frustrated by the lowered speed limit. At the time, the Ohio Revised Code only allowed for the use of variable speed limits (VSL) within construction work zones. Interest in establishing a permanent VSL corridor grew as local agencies and motorists discussed the safety of the corridor. ODOT advocated for legislation that was passed in the Summer of 2017 giving ODOT the go-ahead to move forward with designing a VSL corridor. The Variable Speed Limit thus became statutory. A simplified set of plans was developed between Central Office ITS and District 12 Planning and Construction Departments. The ITS network expansion was planned, permanent VSL signs and new Digital Message Signs were specified along with additional CCTV cameras and new Roadway Weather Information stations. A new software platform was needed to receive the RWIS data, recommend speed limits, and to control the signs. This exceeded the capabilities of ODOT’s legacy ATMS software. FHWA’s “Synthesis of Variable Speed Limits” document guided the development of the criteria for speed limit reductions, and Standard Operating Procedures. The maximum speed limit for the corridor is 70 mph, while the lowest speed limit, 30 mph, is reserved for high-impact incidents such as a long-term lane closure. The speed limit of the road is reduced in 10-mph increments as conditions warrant. For example, a moderate amount of precipitation may merit a 60-mph speed-limit change, while drifting conditions or low visibility could further reduce the speed limit to 50 mph. To facilitate speed changes, the ODOT statewide Traffic Management Center (TMC) developed an application to determine which VSL speed was appropriate for the roadway based on the various winter weather criteria. When the speed limit of I-90 changes, the TMC application sends an e-mail message to key ODOT personnel as well as local first responders. Staffing of the ODOT TMC was expanded to allow one designated employee to monitor the corridor 24 hours a day. Given the time constraints, full deployment would be unable to be completed prior to the upcoming winter season. So, temporary trailer-mounted VSL signs were deployed along the corridor. A spreadsheet was developed to receive the visibility and friction data along with logic built in to recommend speed changes based on the operating rules developed for the corridor. Full construction was completed prior to the 2018 winter.

During the 2018-2019 snow and ice season, the corridor featured 19 permanent digital speed-limit signs, nine eastbound and 10 westbound along this stretch of I-90. The project also included the addition of five closed- circuit television cameras, three additional Roadway Weather Information Systems (RWIS) and several pavement sensors that assist in supplying the TMC and the motoring public with up-to-date road conditions. In coordination with the National Weather Service, a snow squall warning system was established. Six dynamic message signs display warnings to drivers when whiteout conditions are expected. Furthermore, a layer was created on ODOT’s traveler information system, www.ohgo.com and the OHGO app, to visually display the corridor signs, as well as to push alerts to subscribers when the VSL has been activated. Multiple stakeholder meetings occurred between the ODOT Central Offices Operations Division, the TMC, District Maintenance, and PIO staff along with the National Weather Services and area first responders to develop the methodology of the corridor. ODOT relied heavily upon Social Media campaigns and undertook a public relations blitz with local media to explain the corridor operations. While in Operations the speed limit changes were shared via social media to local motorists. ODOT’s traveler information system, OHGO, was also updated with a new Variable Speed Limit layer.

Over the two winter seasons since opening the corridor, the following benefits have been realized: