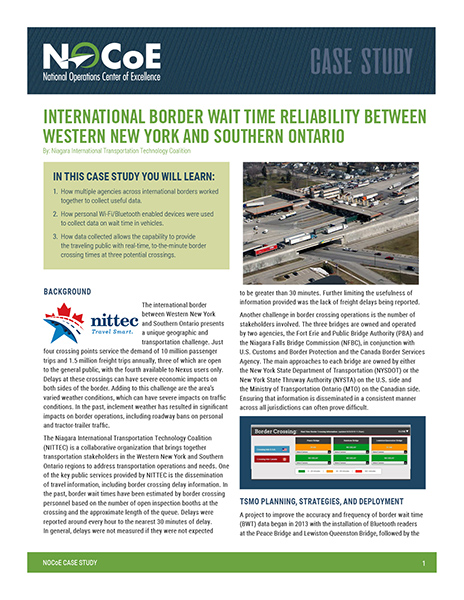 The international border between Western New York and Southern Ontario presents a unique geographic and transportation challenge. Just four crossing points service the demand of 10 million passenger trips and 1.5 million freight trips annually, three of which are open to the general public, with the fourth available to Nexus users only. Delays at these crossings can have severe economic impacts on both sides of the border. Adding to this challenge are the area’s varied weather conditions, which can have severe impacts on traffic conditions. In the past, inclement weather has resulted in significant impacts on border operations, including roadway bans on personal and tractor-trailer traffic.

The Niagara International Transportation Technology Coalition (NITTEC) is a collaborative organization that brings together transportation stakeholders in the Western New York and Southern Ontario regions to address transportation operations and needs. One of the key public services provided by NITTEC is the dissemination of travel information, including border crossing delay information. In the past, border wait times have been estimated by border crossing personnel based on the number of open inspection booths at the crossing and the approximate length of the queue. Delays were reported around every hour to the nearest 30 minutes of delay. In general, delays were not measured if they were not expected to be greater than 30 minutes. Further limiting the usefulness of information provided was the lack of freight delays being reported.

Another challenge in border crossing operations is the number of stakeholders involved. The three bridges are owned and operated by two agencies, the Fort Erie and Public Bridge Authority (PBA) and the Niagara Falls Bridge Commission (NFBC), in conjunction with U.S. Customs and Border Protection and the Canada Border Services Agency. The main approaches to each bridge are owned by either the New York State Department of Transportation (NYSDOT) or the New York State Thruway Authority (NYSTA) on the U.S. side and the Ministry of Transportation Ontario (MTO) on the Canadian side. Ensuring that information is disseminated in a consistent manner across all jurisdictions can often prove difficult.

A project to improve the accuracy and frequency of border wait time (BWT) data began in 2013 with the installation of Bluetooth readers at the Peace Bridge and Lewiston-Queenston Bridge, followed by the Rainbow Bridge in 2018. The readers used are part of the Bluetooth Traffic Monitoring System offered by TPA North America and are mounted at various points along the bridges and the approaching roadways. The readers collect travel data anonymously by identifying travelers’ Bluetooth and Wi-Fi enabled devices and monitor them as they cross the border. The readers can read data in a range of 125 meters (approximately 410 feet). The readers are able to capture the following data for personal vehicles and freight at 60-second intervals:

Execution of this project, and the realization of data-driven improvements stemming from it, would not have been possible without the close collaboration of stakeholders on both sides of the U.S.- Canada border. Installation and operation of the system by the PBA and NFBC, as well as their participation in data-sharing with NITTEC, made this effort possible. Using this information in operations to improve TSMO was carried out by NITTEC’s Border Crossing Committee, which includes NYSDOT, NYSTA, Erie and Niagara Counties, Federal Highway Administration (FHWA), Transport Canada, Greater Buffalo Niagara Regional Transportation Council (GBNRTC, Buffalo’s Metropolitan Planning Organization), Niagara Frontier Transit Authority (NFTA), Ministry of Transportation Ontario, and the Niagara Region.

This newly available high-resolution data has allowed for both operational benefits and enhanced performance measurement. Border wait times can now be analyzed on a continuous basis, as well as to a much higher degree of accuracy, compared to the sporadic estimates conducted in the past. This has allowed NITTEC personnel to examine border crossing times much in the same way travel times for roadways are evaluated by FHWA. At each crossing in each direction, average and peak travel times are now examined to provide measures of travel time reliability, as well as determine which days, months, and hours are most likely to experience the most significant delays. Additionally, crossing times for freight can now be analyzed along with passenger travel.

With this new data, both the bridge authorities and NITTEC now have the capability to provide the traveling public with real-time, to-the-minute border crossing times at all three potential crossings. With delays that can escalate to over two hours, giving drivers accurate information with which to make decisions is crucial. The data has also proven what has been qualitatively reported for some time: that when significant wait times are occurring at one crossing, one or both of the other crossings is simultaneously experiencing little to no delay. This further emphasizes the need for real-time data dissemination, as travelers can make a better route choice either prior to their trip or en-route. This will not only improve their personal travel experience, but operations of the network as a whole.