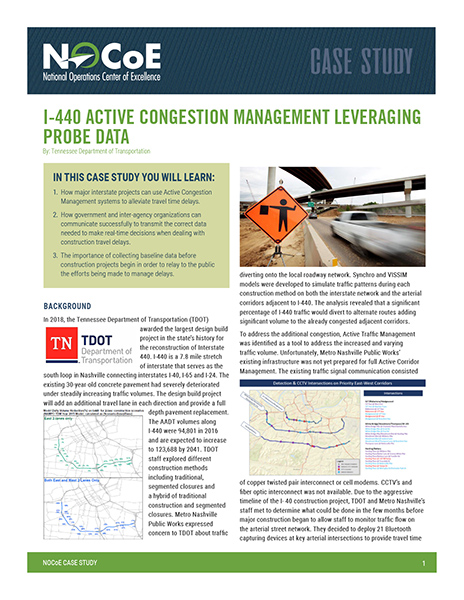 In 2018, the Tennessee Department of Transportation (TDOT) awarded the largest design build project in the state’s history for the reconstruction of Interstate 440. I-440 is a 7.8 mile stretch of interstate that serves as the south loop in Nashville connecting interstates I-40, I-65 and I-24. The existing 30-year-old concrete pavement had severely deteriorated under steadily increasing traffic volumes. The design build project will add an additional travel lane in each direction and provide a full depth pavement replacement. The AADT volumes along I-440 were 94,801 in 2016 and are expected to increase to 123,688 by 2041. TDOT staff explored different construction methods including traditional, segmented closures and a hybrid of traditional construction and segmented closures. Metro Nashville Public Works expressed concern to TDOT about traffic diverting onto the local roadway network. Synchro and VISSIM models were developed to simulate traffic patterns during each construction method on both the interstate network and the arterial corridors adjacent to I-440. The analysis revealed that a significant percentage of I-440 traffic would divert to alternate routes adding significant volume to the already congested adjacent corridors.

To address the additional congestion, Active Traffic Management was identified as a tool to address the increased and varying traffic volume. Unfortunately, Metro Nashville Public Works’ existing infrastructure was not yet prepared for full Active Corridor Management. The existing traffic signal communication consisted of copper twisted pair interconnect or cell modems. CCTV’s and fiber optic interconnect was not available. Due to the aggressive timeline of the I- 40 construction project, TDOT and Metro Nashville’s staff met to determine what could be done in the few months before major construction began to allow staff to monitor traffic flow on the arterial street network. They decided to deploy 21 Bluetooth capturing devices at key arterial intersections to provide travel time and speed data. The units were deployed before major construction began to capture baseline data. Using the real time data from these units, staff were able to perform Active Corridor Management on the arterials near I-440.

A TSMO plan was developed to minimize traffic delay on the interstate network and arterial networks throughout the duration of the construction project which consisted of multiple phases. During major construction, I-440 was reduced to two 11-foot lanes with a two-foot shoulder for both eastbound and westbound directions. An incident management plan was developed for the interstate network to quickly clear crashes from the travel lanes of I-440 to reduce incident related delay, reduce the possibility of secondary incidents and optimize traffic flow as much as possible. This required close coordination between first responders, TDOT HELP truck program operators and TDOT construction staff. Twenty-one Bluetooth capturing devices were deployed to provide Metro Nashville Staff real-time speed and travel-time data on the arterial network. The main objective of the TSMO plan was to distribute the increased delay on the arterial networks due to the diversion traffic. Before the I-440 construction project began, arterial streets near the project were analyzed extensively for potential impacts due to diverting I-440 traffic using Synchro models developed during the initial planning stages of the project. These models were used to identify the locations that would benefit the most from new signal timing plans during construction. TDOT coordinated with Metro Nashville Public Works on the retiming of the traffic signals on routes most affected by the construction. TDOT does not maintain or own traffic signals so coordination with Metro Nashville was essential. With the assistance of funding from TDOT, Metro Nashville implemented special construction signal timings for 58 traffic signals that engineers predicted would see a significant change in traffic patterns.

To minimize vehicle queues, engineers ran longer cycles that delay the onset of saturated conditions and allow the coordinated signal systems to recover more quickly. Metro staff tried to minimize and balance vehicle delay for all approaches during the peak periods. The new signal timing plans were implemented at the start of major construction so that they would be in place before diversion traffic started to occur. Since the Bluetooth units were deployed before construction began, Metro staff had baseline data to compare with the current traffic data. Metro Nashville staff closely monitored travel times as construction progressed and made signal timing adjustments as necessary. The contractor took several weeks to shift all of I-440 down to the narrowed 11-foot lane cross section from the existing conditions. Diversion traffic steadily increased as the percentage of I-440 was narrowed to the construction cross section increased. The customized signal timing plans along with the Bluetooth capturing devices allowed staff to monitor traffic and make changes as necessary throughout the various phases of construction to optimize traffic flow and minimize delay. The Bluetooth devices provided a continuous stream of data that staff could use to track how travel-time and speeds were changing as the project progressed through different phases of construction.

Due to the size and complexity of this project, coordination between multiple internal and external agencies was required during the life of the project. The project involved several divisions of TDOT including Traffic Operations, Construction and the Traffic Management Center. The interstate incident management plan required close coordination between first responders, TDOT HELP truck program operators and TDOT construction staff. To manage the arterial signal networks, communication between TDOT and Metro Nashville Public Works was critical because TDOT does not own or maintain any traffic signals in the state.

Before the project began, TDOT undertook an extensive public information campaign to inform the public when the project would be starting and what to expect. This information was disseminated through TDOT’s website, local news agencies and social media platforms. Throughout the project, the media platform was used to provide traffic management updates, project milestones, dates of overnight and weekend closures along with alternate routes that would be available. When traffic volumes started to increase on the arterials due to the diversion traffic, TDOT and Metro Nashville Public Works received several complaints about increased traffic congestion due to the I-440 project. Using the Bluetooth data, staff were able to use real-time data to verify the authenticity of the complaint. When responding to a concerned citizen’s complaint, staff could provide real-time travel data for the segment in question before and during construction.

Having actual travel time data was invaluable because it often showed that travel time remained the same or slightly increased instead of the dramatic increase that the citizen is imagining. It was difficult for those complaining to continue to argue when provided with actual travel-time numbers, and it helped them see staff were doing everything they could to manage the extra traffic. To help TDOT and Metro Nashville respond to future complaints, a memo was created to distribute to citizens or council members when they inquired about traffic congestion in relation to the I-440 project. This memo was used to inform them of what has been done to mitigate traffic congestion.

The TSMO plan was effective by minimizing traffic delays on the interstate network and arterial networks throughout the duration of construction and also by promoting coordination between Metro Nashville and TDOT. This project has set a new benchmark for TDOT and Metro Nashville for working together to address traffic congestion for an interstate project. The public benefited by having a more reliable and efficient transportation network to use. Some lessons learned include realizing the Bluetooth devices installed do not collect traffic volume data. Staff received multiple requests about how traffic volumes had changed on certain arterials since construction began. Unfortunately, the Bluetooth devices installed only capture travel-time and speed data. Sometimes travel-time data alone does not provide a complete picture of the situation. For example, the travel-time may have increased for the minor travel direction movement, but the major travel direction movement travel-time decreased which benefited a much larger number of people. The next time we undertake a project like this, TDOT will install devices that collect volumes in addition to the Bluetooth capturing units.