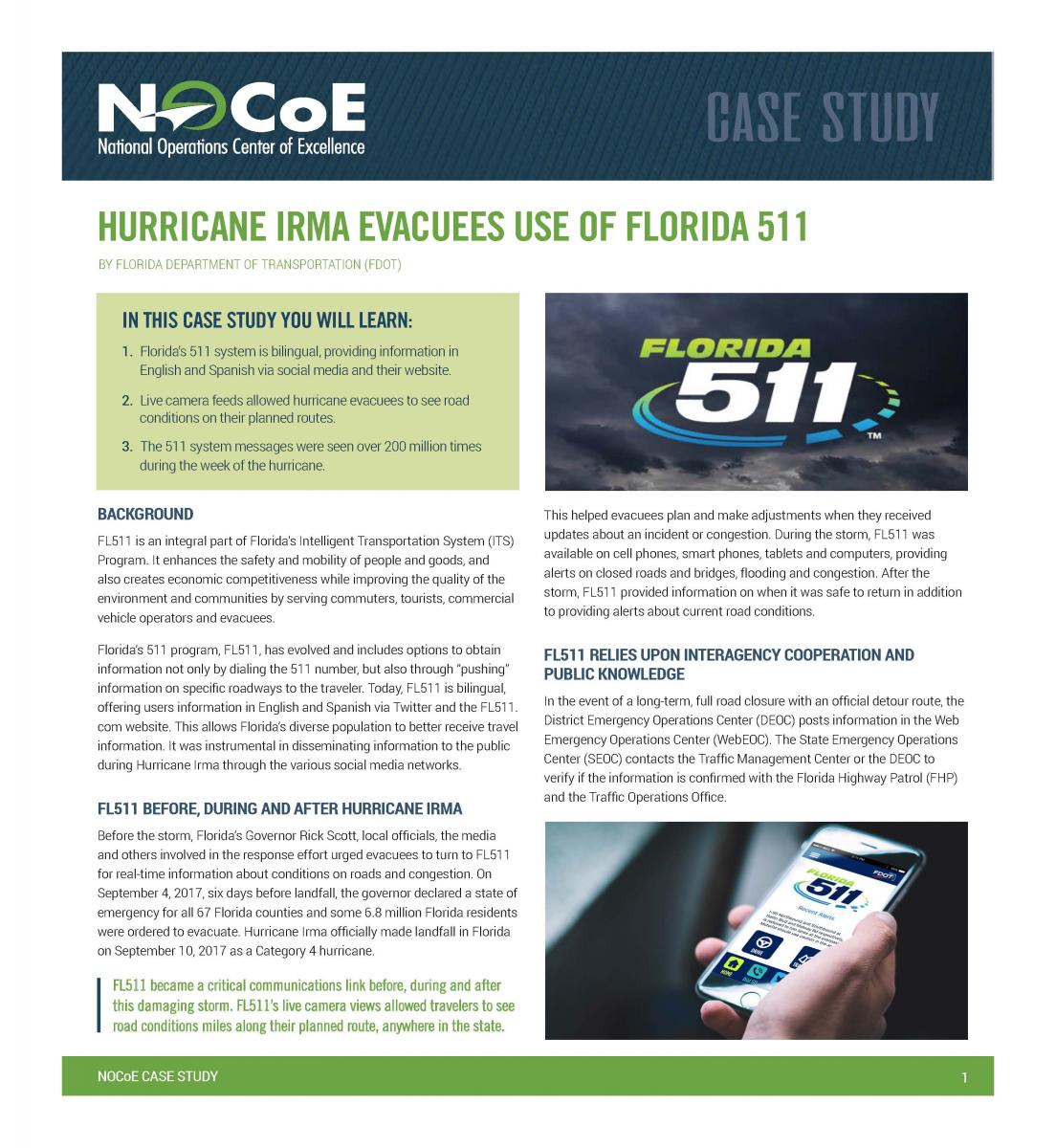 1. Florida’s 511 system is bilingual, providing information in English and Spanish via social media and their website.

3. The 511 system messages were seen over 200 million times during the week of the hurricane.

FL511 is an integral part of Florida’s Intelligent Transportation System (ITS) Program. It enhances the safety and mobility of people and goods, and also creates economic competitiveness while improving the quality of the environment and communities by serving commuters, tourists, commercial vehicle operators and evacuees.

Florida’s 511 program, FL511, has evolved and includes options to obtain information not only by dialing the 511 number, but also through “pushing” information on specific roadways to the traveler. Today, FL511 is bilingual, offering users information in English and Spanish via Twitter and the FL511. com website. This allows Florida’s diverse population to better receive travel information. It was instrumental in disseminating information to the public during Hurricane Irma through the various social media networks.

FL511 BEFORE, DURING AND AFTER HURRICANE IRMA

Before the storm, Florida’s Governor Rick Scott, local officials, the media and others involved in the response effort urged evacuees to turn to FL511 for real-time information about conditions on roads and congestion. On September 4, 2017, six days before landfall, the governor declared a state of emergency for all 67 Florida counties and some 6.8 million Florida residents were ordered to evacuate. Hurricane Irma officially made landfall in Florida on September 10, 2017 as a Category 4 hurricane.

This helped evacuees plan and make adjustments when they received updates about an incident or congestion. During the storm, FL511 was available on cell phones, smart phones, tablets and computers, providing alerts on closed roads and bridges, flooding and congestion. After the storm, FL511 provided information on when it was safe to return in addition to providing alerts about current road conditions.

FL511 became a critical communications link before, during and after this damaging storm. FL511’s live camera views allowed travelers to see road conditions miles along their planned route, anywhere in the state.

Upon confirmation, SEOC requests the FDOT District Traffic Operations Office to confirm the detour provided in the WebEOC. The detour route is then prepared in FDOT’s geographic information system. In the aftermath of Hurricane Irma, FDOT instituted a significant enhancement by making detour route preparation and posting to FL511 both automated and simultaneous.

Through these coordinated efforts, the public received updated information on road closures and detour routes. On September 9, 2017, the day before landfall, 28,441 people were utilizing the system, exceeding the expected capacity of 25,000 concurrent users.

FDOT learns from and applies lessons from every major event that utilizes FL511. As previously mentioned, the road closure and detour route process were streamlined. Another lesson learned was increasing the capacity to the FL511 system. FL511 was only designed for 25,000 concurrent users. The system’s capacity has now been increased to accommodate additional concurrent users.

FL511 became the main go-to source for the most current evacuation information for motorists.