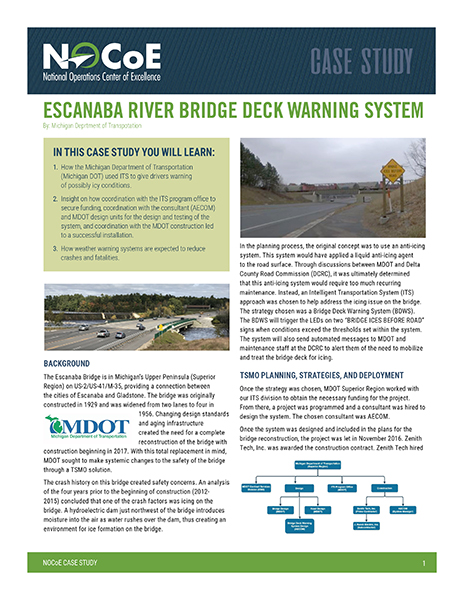 The Escanaba Bridge is in Michigan’s Upper Peninsula (Superior Region) on US-2/US-41/M-35, providing a connection between the cities of Escanaba and Gladstone. The bridge was originally constructed in 1929 and was widened from two lanes to four in 1956. Changing design standards and aging infrastructure created the need for a complete reconstruction of the bridge with construction beginning in 2017. With this total replacement in mind, MDOT sought to make systemic changes to the safety of the bridge through a TSMO solution.

The crash history on this bridge created safety concerns. An analysis of the four years prior to the beginning of construction (2012-2015) concluded that one of the crash factors was icing on the bridge. A hydroelectric dam just northwest of the bridge introduces moisture into the air as water rushes over the dam, thus creating an environment for ice formation on the bridge.

In the planning process, the original concept was to use an anti-icing system. This system would have applied a liquid anti-icing agent to the road surface. Through discussions between MDOT and Delta County Road Commission (DCRC), it was ultimately determined that this anti-icing system would require too much recurring maintenance. Instead, an Intelligent Transportation System (ITS) approach was chosen to help address the icing issue on the bridge. The strategy chosen was a Bridge Deck Warning System (BDWS). The BDWS will trigger the LEDs on two “BRIDGE ICES BEFORE ROAD” signs when conditions exceed the thresholds set within the system. The system will also send automated messages to MDOT and maintenance staff at the DCRC to alert them of the need to mobilize and treat the bridge deck for icing.

Once the strategy was chosen, MDOT Superior Region worked with our ITS division to obtain the necessary funding for the project. From there, a project was programmed and a consultant was hired to design the system. The chosen consultant was AECOM.

Once the system was designed and included in the plans for the bridge reconstruction, the project was let in November 2016. Zenith Tech, Inc. was awarded the construction contract. Zenith Tech hired J. Ranck Electric, Inc. as the electrical sub-contractor to construct the BDWS. MDOT Superior Region also hired AECOM through an additional authorization to perform system manager services during construction. This provided expertise to MDOT and the contractor on the installation of the system, testing the system, and integrating the system into our existing software (ATMS).

Testing of the system occurred during the week of July 8th. The determination of a slick bridge deck condition is based off sensor inputs measuring air temperature / relative humidity, precipitation, surface temperature, surface status and friction. These inputs are processed locally through an algorithm which activates the systems flashing LED border signs when a threshold is exceeded. The system communicates through fiber optic cable between the head-end cabinet (co-located at the existing ESS) and remote warning sign locations. Past installations of the system within the state communicate wirelessly between the head-end and their remote warning signs. It was determined during design for the Escanaba deployment to pilot a fiber connection which can be studied compared to the past installations for activation response time from sensor inputs. Another concern was misalignment of radios, if used, caused by snow removal operations contacting the warning signs. Test scenarios for activating the system had to be created by the construction / integration team, since the integration of the system took place in July. These test scenarios included creating a wet and frozen pavement condition, provided by a block of ice and water placed within the remote pavement sensors detection area.

Non-invasive pavement sensors were chosen to be used on this system over the in-pavement sensors for maintenance reasons, and the non-invasive sensors detect a larger area of pavement to give us a more representative sample of bridge deck. Also, the existing Environmental Sensor Station (ESS) was used as a cost-effective measure where the ancillary sensor components were already there and could be used.

After all testing was successfully completed, the system entered a 60-day burn-in period into MDOT’s ATMS software, which was just completed in September 2019.

Public communication was also a priority. A public meeting was held in March 2016 to discuss the bridge construction, traffic impacts and detours that the public should expect to see in the coming years. The BDWS was discussed at this meeting in the context of public concern about the safety of the new bridge and removal of the existing center barriers. Subsequent news releases and media updates on the project emphasized the BDWS as a major safety improvement. The project webpage on the MDOT website included information on the warning system. The BDWS was also highlighted in a separate statewide news release as one of the safety projects contributing to the region’s Toward Zero Deaths efforts in 2018-2019.

The bridge deck warning system was constructed for the public to increase awareness of icing on the bridge and hopefully reduce the number of crashes in this vicinity. When the system is triggered it will not only inform the public through a flashing “BRIDGE ICES BEFORE ROAD” sign, but it also will send automated messages to MDOT and maintenance staff at the Delta County Road Commission to alert them of the need to go and treat the bridge deck for icing.

Construction on this project was completed this year (September 2019); and implemented through the winter season. The system will trigger the LEDs on the BDWS sign when temperatures are below freezing, and the bridge deck is wet. As described above, the system was tested and determined to be functioning.

After successful testing, MDOT is hopeful no new problems will arise. MDOT will continue to monitor when the system is triggered, how maintenance staff reacts to the system trigger, and the overall safety of this location.

Even though the Superior Region BDWS has not seen a winter, there are similar systems already installed in MDOT’s North Region, and they have seen some success: