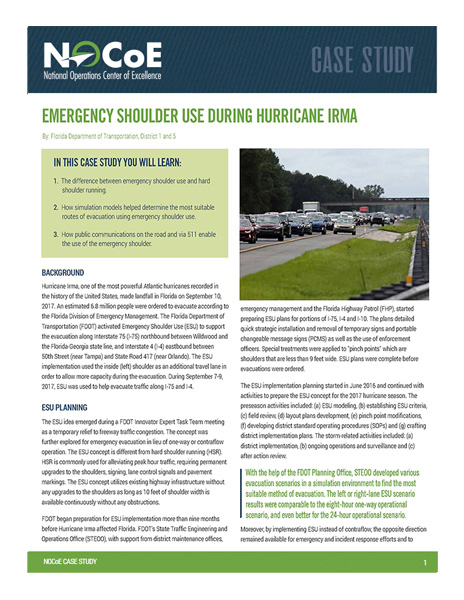 1. The difference between emergency shoulder use and hard shoulder running.

2. How simulation models helped determine the most suitable routes of evacuation using emergency shoulder use.

3. How public communications on the road and via 511 enable the use of the emergency shoulder.

Hurricane Irma, one of the most powerful Atlantic hurricanes recorded in the history of the United States, made landfall in Florida on September 10, 2017. An estimated 6.8 million people were ordered to evacuate according to the Florida Division of Emergency Management. The Florida Department of Transportation (FDOT) activated Emergency Shoulder Use (ESU) to support the evacuation along Interstate 75 (I-75) northbound between Wildwood and the Florida-Georgia state line, and Interstate 4 (I-4) eastbound between 50th Street (near Tampa) and State Road 417 (near Orlando). The ESU implementation used the inside (left) shoulder as an additional travel lane in order to allow more capacity during the evacuation. During September 7-9, 2017, ESU was used to help evacuate traffic along I-75 and I-4.

The ESU idea emerged during a FDOT Innovator Expert Task Team meeting as a temporary relief to freeway traffic congestion. The concept was further explored for emergency evacuation in lieu of one-way or contraflow operation. The ESU concept is different from hard shoulder running (HSR). HSR is commonly used for alleviating peak hour traffic, requiring permanent upgrades to the shoulders, signing, lane control signals and pavement markings. The ESU concept utilizes existing highway infrastructure without any upgrades to the shoulders as long as 10 feet of shoulder width is available continuously without any obstructions.

FDOT began preparation for ESU implementation more than nine months before Hurricane Irma affected Florida. FDOT’s State Traffic Engineering and Operations Office (STEOO), with support from district maintenance offices, emergency management and the Florida Highway Patrol (FHP), started preparing ESU plans for portions of I-75, I-4 and I-10. The plans detailed quick strategic installation and removal of temporary signs and portable changeable message signs (PCMS) as well as the use of enforcement officers. Special treatments were applied to “pinch points” which are shoulders that are less than 9 feet wide. ESU plans were complete before evacuations were ordered.

With the help of the FDOT Planning Office, STEOO developed various evacuation scenarios in a simulation environment to find the most suitable method of evacuation. The left or right-lane ESU scenario results were comparable to the eight-hour one-way operational scenario, and even better for the 24-hour operational scenario. Moreover, by implementing ESU instead of contraflow, the opposite direction remained available for emergency and incident response efforts and to pre-stage post-storm response assets. ESU was easily adjusted to traffic pattern changes as all interchanges retained full egress/ingress.

STEOO led the effort to develop concept plans, identify ongoing and future construction projects and perform field reviews. After the field review, the concept plans were developed for five final selected corridors. The District Traffic Engineering and Operations and Maintenance Offices reviewed the plans. These concept plans were reviewed by FDOT Central Offices including Design, Traffic Engineering and Operations, Maintenance, the Federal Highway Administration, the FHP, the Emergency Management Office and consultants. Districts developed implementation plans from the concept plans and incorporated them into district-specific traffic management plans for implementation before the hurricane season.

FDOT districts developed SOPs in conjunction with law enforcement and FDOT contracting partners. Districts prepared the operations required for implementing ESU. Districts also addressed who, what, when, where and how operations were to be performed, and established the timeframes to implement when the notice to proceed was given.

FDOT utilized multiple communication platforms to promote ESU during the evacuation. This included Florida 511, which is the department’s official source for real-time traffic information. During the evacuation on the morning of September 9, the Florida 511 website (FL511.com) set a record with 28,441 concurrent users.

The Department posted the message for ESU on Dynamic Message Signs (DMS) and coordinated with other navigation providers to communicate the ESU option on their mobile applications. News releases were distributed to applicable media and social media alerts were sent via the Twitter and Facebook pages of the governor, Florida Division of Emergency Management and FDOT.

With an estimated 6.8 million people ordered to evacuate, both the I-75 and I-4 ESU operations helped evacuees get to safety well before the tropical force winds arrived while still allowing emergency responders to travel in the opposite direction. Although minor collisions involving rear-end and side-swipe crashes occurred, there were no severe injury crashes or fatalities. The ESU operation was implemented without a major disruption to traffic flow, and interchanges remained open for drivers to access food and fuel. The reduced number of law enforcement personnel required to support ESU allowed for more law enforcement staff to focus on other storm preparation needs.

An “accordion effect” was observed with heavy congestion followed by pockets of free flow conditions on both I-75 and I-4 during the ESU operation. There was also observed congestion at the Florida-Georgia state line due to the termination of ESU. On I-75, while all roadway construction activities were suspended prior to evacuation orders, a major construction project south of the I-75/Turnpike interchange caused shoulder closures along the evacuation route.